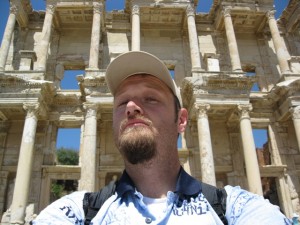 Just got back from an incredible trip overseas and I have more to communicate than I could ever hope to pour out in a single sermon, blog or conversation. So, whoever shows up at church this weekend… God help them.

One of the great parts of this recent road trip was the opportunity to visit the ancient ruins of Ephesus and actually stand where the Apostle Paul stood. You know, to not guess, but to whip out the old Holy Bible and read the chapter and verse and quote what he said standing on the very spot he said it.

Kinda cool. Felt a little like a time machine with the flux capacitor kicked into high gear.

So, here I am this morning trying to reintegrate/catch up on the week we missed and I decided to reread some of the passages connected to the places I’d just seen.

Right out of Acts 19 while Paul was visiting Ephesus is this crazy, funny story:

﻿13﻿ Some Jews who went around driving out evil spirits tried to invoke the name of the Lord Jesus over those who were demon-possessed. They would say, “In the name of Jesus, whom Paul preaches, I command you to come out.”  ﻿14﻿ Seven sons of Sceva, a Jewish chief priest, were doing this.  ﻿15﻿ One day the evil spirit answered them, “Jesus I know, and I know about Paul, but who are you?”  ﻿16﻿ Then the man who had the evil spirit jumped on them and overpowered them all. He gave them such a beating that they ran out of the house naked and bleeding. – The Holy Bible  : New International Version. 1996, c1984 (Ac 19:13-16). Grand Rapids: Zondervan.

They got the naked beat down of their lives for name droppin’.  Makes me giggle everytime I read it, but this time I seemed to read it with a little different eyes and heard a slightly different message.

Still made me laugh though… naked…ha.

As we traveled through Central Asia I was really convicted seeing so many doing so much with so little. I was convicted of mine/our whining about how much ‘more’ we need to get the job done, feel comfortable and feel appreciated.

The truth is, we don’t need anything else to do what God has already asked us to do… we already have enough:

You see, even if something looks like it’s not enough, not quite right, or maybe even bad, we serve a God who can take the broken, dismal and lacking and use it to accomplish anything!

Right after the demonic strip show, here’s what happened in Acts 19:

﻿17﻿ When this became known to the Jews and Greeks living in Ephesus, they were all seized with fear, and the name of the Lord Jesus was held in high honor.  ﻿18﻿ Many of those who believed now came and openly confessed their evil deeds.  ﻿19﻿ A number who had practiced sorcery brought their scrolls together and burned them publicly. When they calculated the value of the scrolls, the total came to fifty thousand drachmas.﻿﻿  ﻿20﻿ In this way the word of the Lord spread widely and grew in power. – The Holy Bible  : New International Version. 1996, c1984 (Ac 19:17-20). Grand Rapids: Zondervan.

Yowzers!  Even though a bunch of spiritually immature, name dropping, spotlight stealing wannabes stuck their nose where it shouldn’t have been and got it smacked, God used it.

Here’s what happened “﻿ When this became known to the Jews and Greeks living in Ephesus”:

All from a bunch of failed, naked, bleeding guys.

We’ve got to stop our whining and just go do something. We have enough, we have the time, we have the skills.

God is great, that’s His job.

Be His, be faithful, be bold, be moving, be willing, be fearless, be reckless, be ready…

When you move in Him, He can even do beautiful things with your failures.