That’s not really meant to be a statement of fact, because by now it’s extremely old news. It’s really more of a measuring rod.

When you hear that phrase, what does it do inside of you?

I’ve been watching Facebook,Twitter, reading other blogs, and have stayed dialed into major network news for the last 24 hours.

It appears the responses to the worldwide obituary run the gamut of human emotion:

By conflicted I do not mean there is an outpouring of sympathy toward Osama Bin Laden. Far from it!

But, in several expressions I have read and heard, there is a difficulty in reconciling the spontaneous joy over the news of another man’s death (undoubtedly evil though he was), and the “Christian” call to be a person of grace and mercy.

The emotions on both sides of the fence are very real, but seem to be contradictory. The only normal response is frustration, confusion, hurt and… well, being conflicted.

I have no desire to be a global psychologist, but I must admit I find myself in that minority of the conflicted.

My problem… everything I believe doesn’t seem to hold hands. So, I’m conflicted.

I’m sure I will wrestle with END_OF_DOCUMENT_TOKEN_TO_BE_REPLACED

Everyone deals with it, but the question is how do you deal. There are constructive and destructive ways to deal with almost anything including conflict, criticism and stupidity.

Hmm… that last descriptor is less from my Bible Study and more from the movie I just caught last night: GI JOE. 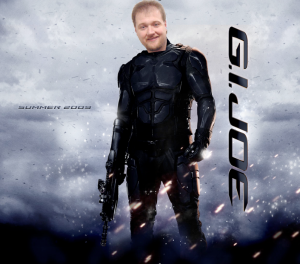 If one of the JOEs ran into conflict they’d blow it up, punch it in the face, or just kill it.

And, as machismo and testosterone driven as that is (and, oh so appealing for so many situations), I don’t think it’s the answer for the Christ follower in conflict.

I just can’t imagine Jesus strapping on a fully automatic machine gun with rocket launcher attachment and sneering at his 12-man commando posse as He jumps on the back of camel yelling, “Mount up”. END_OF_DOCUMENT_TOKEN_TO_BE_REPLACED