It was a first for me. It was gentle, it was loving, it was sweet pillow talk, but it was definitely my very first Christmas scolding.

After a great night with my family filling our home, eating way too much (my wife can really rock the holiday turkey), and watching the kids tear into the presents, we collapsed into bed. That’s when the loving reprimand came my way.

“You haven’t told me anything you want for Christmas,” she said.

“I told you I wanted a harmonica,” I responded.

It’s at this point I can’t blog what happened next, I can’t even really describe it in person, but let’s just say my wife has learned to roll her eyes even when they’re closed.

The problem is, she’s totally right. I have racked my brain trying to answer her question for weeks. There is just nothing that I want, let alone need, that I could put END_OF_DOCUMENT_TOKEN_TO_BE_REPLACED

Twas the night before Christmas and the service begun

The church was all decked out, for holiday fun!

Church members were nestled all snug in their pew

With wreaths and lights and poinsettias in view

The auditorium was warm to instill Christmas cheer

And singers were ready with carols near and dear

Then up at the front with sermon notes handy

A Christmas message, for sure, from old Pastor Andy

The music was great and the message…okay

But everyone’s thoughts were for the breaking of day

For morning would come with presents and joy

Mom getting clothes and Dad, of course, toys

When out on the parking lot there arose such a clatter

We sprang from our seats to see what’s the matter

Running out through the foyer and down the long hall

We stood in the doorway to watch, one and all

A few feet away was a broken down car

Dented and scratched, an eye-sore for sure

Then out stepped a man from this beat up ole caddy

And three youngsters inside, they each called him “Daddy!” END_OF_DOCUMENT_TOKEN_TO_BE_REPLACED

Jochebed. Now there is a name for you.

Of all the biblical names you might know, this probably isn’t one of them.

Go ahead, take your guess: some incredible warrior whose story is tucked away deep in 2 Chronicles, a prophet who didn’t last long at the hands of Babylonians, or a Pharisee who conspired against Jesus?

But, not just any mom. Jochebed is the mother of Moses.

I love her story.

She was a mother in unfortunate circumstances. She was a slave in Egypt while a partial genocide was in progress. Baby Hebrew boys were being sacrificed to the Egyptian God of the Nile.

She defied the authorities and hid her son for three months. When hiding him was no longer possible, she got a basket and set him afloat on the Nile where he was discovered by Egyptian royalty and adopted.

This is the story of motherhood.

Perseverance. Even in the most difficult of circumstances she never gave up. She was a slave (any mothers beginning to identify?) in a culture so difficult to raise a child she literally had to save his life everyday.

Humility. Her name is hard to find, let alone spell. She is not even identified in this story that describes her most memorable moment. Its chapters later, in the genealogy of her son, that we finally see her name.

Risky. Hiding her son not only implied he was in danger, but her actions now put her and the rest of her family in danger, too. But, it didn’t matter. She made the decision that being a mother was risky business.

Creative. Without the back story, placing your child in a basket and floating him downstream hoping something good might happen probably won’t win you the mother of the year award. But in reality, this was brilliantly creative: children were daily being sacrificed in the river and a floating basket with a boy inside would not be out of place, placing the child in the reeds so that he would not float aimlessly was strategic, and selecting a spot on the river where he could be discovered by the only ones who could save him… that’s how biblical mommas roll!

This Mother’s Day weekend I hope you will celebrate the mothers in your life. Whether it’s your mom, your children’s mom, or just a mom near you, I hope you’ll take time to be thankful and thank them.

Mom, you are amazing and today we call you Jochebed, whose name in the original Hebrew means, “Glory of God.”

We see His glory in you… Happy Mother’s Day.

This is an open letter to my wife on our 15th wedding anniversay. She means more to me than words can say…

On our 15th wedding anniversary, I find that today is an example like so many days in the last 15 years that show an inexplicable love and devotion that I neither deserve nor understand. But, nonetheless, it’s this relationship with you that I treasure more than almost anything in my world. 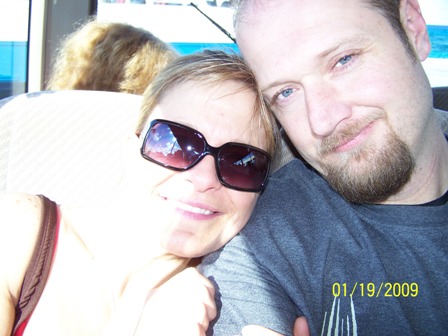 For the last 15 years I have been a youth pastor and/or camp speaker with a July wedding anniversary. So, only once or twice in our years together have we actually spent these precious camp dates together. When we did, they were days shared with others, like today.
Today, for our 15th wedding anniversary you drove yourself and our boys all the way to central Texas to spend 3 days with me and about 700 third through sixth graders. Then on this big day you celebrated by:

• getting up early
• packing for two boys, a husband and yourself
• doing most of the heavy lifting because my head was hurting again
• listening to me preach for the 1 billionth time
• working the product table and making change out of campers wet lake water money
• driving a second car 8.5 hours home
• making your anniversary dinner a burger, fries and peanut buster parfait from Dairy Queen at a truck stop in nowhere Oklahoma
• finally, making the late night unload at the church of all the tech equipment and junk we’d been hauling

Most impressive of all Mrs. Addis was the fact that everytime I saw you today you smiled and hugged and looked for a kiss. Even though many others would whine and complain about their lot in life, you showed joy and love.
It was a day you could rightfully claim as your own, even if you had given up so many others. Surely, the 15th should be special. But, you put your God, your husband and the cause before yourself.
You’ve never looked more beautiful to me. END_OF_DOCUMENT_TOKEN_TO_BE_REPLACED