I can’t decide which I love more, coffee or coffeeshops.

Like so many others I find it easier to get work done hiding in public, so, when deadlines are pressing I find a comfy, over stuffed chair in the corner of a coffeeshop, plug in, tune out, start sipping and get stuff done.

No staff members ringing through on my extension, no random drop by visits and most beneficially, no giant stacks of other things begging to be done and competing for my attention. Just a caffeine driven focus!

Where I live in Hutchinson there a few options when choosing your coffeeshop bunker, but the deciding factors for defining my home base are:

I know what you’re thinking. “He has far too much time on his hands if he has the opportunity to come up with a punch list for choosing a coffeeshop.”

Well, I have two responses to you (one snotty, the other legit): first, if you have time to read this then don’t say I have too much time (snotty), second, don’t worry there is a spiritual perspective on this (legit). 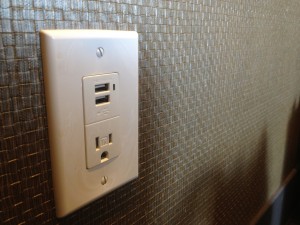 It all started when I sat down here at this non-descript, nationally known coffee shop where this article was produced. Next to my usual chair, I noticed a new plug-in. And, I noticed it’s awesomeness: 2 USB charging ports built in!

I have to be honest, my first thoughts were, “This place rocks… they must care about me and my Apple products.”

Right or wrong, this ‘establishment’ just jumped a little higher on the list when making my workspace decision. But, don’t forget… it’s still about the coffee. The only reason they are still in the running is because the coffee is worth the price.

So, if you asked me how I pick a coffee shop, is it the coffee or is it the ambience? My response would be yes. It’s not either/or, it’s both/and.

I believe there’s a very similar parallel in spiritual dimensions. There is a debate that has been raging, through the church worship wars and before.

On one side you have those seeker sensitive churches that are all about making an impression and providing service: comfortable environments, relevant music, casual atmosphere, topical messages, relational programming, etc.

On the other side are those who focus on God and God alone: a diehard commitment to the Word, a focus on doctrine and theological purity, a community gathered around sacrifice and submission, prayer and worship are a priority, etc.

The problem is, most people consider either side mutually exclusive. They think you’re either a really hip, cool, happening, relevant, modern church that compromises the gospel. Or, you’re a staunch, stodgy, stiffnecked, out of touch, fortress of faithfulness that excludes the world for the sake of purity.

As a pastor and church staff member I have been asked to choose my side in this war again and again. But, I’m tired of choosing sides. Because in reality, I believe they’re both as right as they are wrong.

It’s a holy tension, a divine dichotomy and either/or that needs to be morphed into a both/and! We should be churches and ministries that are committed to personal excellence, using the most relevant tools to do the most damage to the kingdom of darkness while never letting go of the word of God and keeping the gospel dead center.

It’s not about which side you’re on, it’s about making both sides happen in the church today. Believe me, there is nothing new in trying to serve our communities and reach our world with excellence, and making everything about, for and through our God.

Remember the story of building the Tabernacle, the dwelling place of God with the nomadic people in the Exodus. The Tent of Meeting was a magnificent place where the people of God spared no expense to do it right!

In fact, they were so juiced up over doing things with excellence that they had to call off the offering because it was just too much for the project (oh Lord, I pray for those days to return).

Exodus 36:3 And they received from Moses all the contribution that the people of Israel had brought for doing the work on the sanctuary. They still kept bringing him freewill offerings every morning, 4 so that all the craftsmen who were doing every sort of task on the sanctuary came, each from the task that he was doing, 5 and said to Moses, “The people bring much more than enough for doing the work that the Lord has commanded us to do.” 6 So Moses gave command, and word was proclaimed throughout the camp, “Let no man or woman do anything more for the contribution for the sanctuary.” So the people were restrained from bringing, 7 for the material they had was sufficient to do all the work, and more.

And this was just the portable tent of the Hebrew children during their wandering. When they actually arrived in the promised land and God allowed them to build a permanent Temple… wowzers  (that’s a theological term that means… wowzers).

Talk about doing things with excellence and making an impression on those who entered.

But, never forget it’s about the coffee.

The excellence that the people of God tried to pursue did not find its completion until God’s presence rested on it. And when that happened, wowzers (yes… it’s still the best word).

That’s absolutely amazing! That God honored the work of His people by setting His presence so heavily on that place, they couldn’t even enter. There are stories in the Old Testament of God’s people hanging around the edges and bathing in God’s glory.

The trouble is, we need them to be the same church. So, grab your coffee AND your Wi-Fi, then be a church of excellence that holds tight to what we belive. Never forget that while God has called us to worship Him alone He’s tasked us with reaching the world.