You better stay in bed, close the windows and lock the doors! It’s Friday the 13th… beware.

What a nightmare, this year there will be three separate Friday the 13ths on the 2015 calendar… man, are we in trouble. 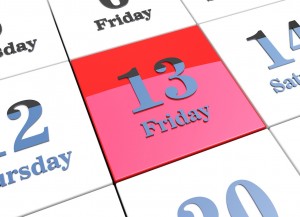 Friday 13th on 3d calendarI wish there was a specific font you could use to indicate sarcasm, but just in case you missed it… the above paragraphs are dripping with it.

Okay, out-of-the-box an apology… my wife says I have a tendency to be snarky at times. This must be one of those, since I’ve noticed it without any help.

I do sincerely apologize if these things are truly concerns to you. Yet, I hope that you’ll take a minute to read the rest of this because I believe today maybe the day you get set free.

Let’s begin with a statement: superstitions are not for your benefit, they are for your imprisonment.

Three things regarding this and the first is understanding the origins of superstitions.

Let us just look at a couple of examples, starting with how it became “bad luck” to open an umbrella in the house.

In an article called “Extraordinary Origins of Everyday Things” (Harper, 1989),Charles Panati wrote: “In eighteenth-century London, when metal-spoked waterproof umbrellas began to become a common rainy-day sight, their stiff, clumsy spring mechanism made them veritable hazards to open indoors. A rigidly spoked umbrella, opening suddenly in a small room, could seriously injure an adult or a child, or shatter a fragile object. Even a minor accident could provoke unpleasant words or a minor quarrel, themselves strokes of bad luck in a family or among friends. Thus, the superstition arose as a deterrent to opening an umbrella indoors.”

Or, consider the superstition of walking under ladders. This particular superstition dates back to ancient Egypt where walking under a ladder desecrated the Egyptian gods, and could get you in a mess of trouble. You remember Egypt, the land of pyramids, those people like their triangles. And, triangles were a symbol of the gods to them.

A ladder leaning upon a wall formed a triangle, and when you walked under it you broke the plane of that triangle thus angering the gods.

So, looking at the origins of the superstations is a bit revealing. Opening an umbrella in the house isn’t about bad luck it’s about using common sense. And, walking under a ladder is no big deal because I’m not really afraid of made-up gods.

Superstitions have their origin in myth, misunderstanding and mix ups. Not really a combination of elements to live your life by, eh?

I believe that God knows the future, from the foundations of the earth knowing every moment of everyday. And, I believe the devil who is jealous of Him, really doesn’t know diddly squat.

But, if the devil can get you to believe in a set of principles that has a predictable set of responses, then he can manipulate your course of action and even appear to shape your destiny.

Yes, I’m actually saying that superstitions have the ability to manipulate you and become self fulfilling prophecies; sometimes used by the devil himself in a way to control you because you bought into his system.

Remember what the Bible teaches in Colossians:

Colossians 2:8 See to it that no one takes you captive by philosophy and empty deceit, according to human tradition, according to the elemental spirits of the world, and not according to Christ. 9 For in him the whole fullness of deity dwells bodily, 10 and you have been filled in him, who is the head of all rule and authority.
Don’t get stuck in the prison of superstition.

A new kind of superstition…

Third, for those of you who are believers, don’t exchange one set of chains for another. There is a form of spiritual superstition that is just as damaging, probably even worse, than the simple fears we’ve been talking about here.

Dallas Willard, seminary professor and theologian, said in his book Hearing God, “Legalism is superstition. The legalistic tendencies found throughout our religious and cultural life also thrust us toward superstition. Legalism claims that overt action in conforming to rules for explicit behavior is what makes us right and pleasing to God and worthy of blessing.”

In a nutshell, becoming legalistic in our belief system creates a religious culture that says if I behave in a certain way certain things will happen. If I do it right then I pull the arm on the slot machine of Heaven and God must produce. If I do it wrong, I must go straight to jail, do not pass go, do not collect $200.

This is one of the problems in the New Testament referred to by Paul again and again and again. You have already been set free by Jesus, why then would you return again to law and become enslaved by it (Check out Galatians).

Jesus not only died to set us free for eternity, he has allowed you to take the chains off here and now! You do not need to be enslaved by silly rules and superstitions in this culture, and you don’t need to return to religious rigmarole that are made up schemes by human teachers.

You have the opportunity to be free because Jesus has already done the work of setting you free. May Friday the 13th become one of your favorite days of the year… a day we celebrate that Jesus set us free!

Happy Friday freedom day. You can do this, knock on wood… just kidding.