Wow… I’ve never been so thankful that I’m not getting paid for this. If this blog was my job, I’d have been fired with a capital “F”. Sorry it’s been so long.

But, I don’t base my significance on my blogging performance, so, I will continue to remember that I am good enough, smart enough and gosh darn it… people like me (thank you Stuart Smalley, you’ve changed my life. By the way, if you don’t know what I’m talking about there are one of two reasons: 1. you either go to bed way too early on Satuday nights, or 2. you have a life and don’t stay home watching TV on the weekends).

Anyway, back to the blogging. This morning I was getting the lowdown on my faith with my homeslice the gospel of Marky Mark forshizzel… ite!

…sorry, every now and then I slip into 80’s gangsta rap vernacular. I thinks it’s due to some head trauma I suffered while watching Boyz n the Hood… kind of like tourettes, I think.

Alrighty then… back to the gospel of Mark. In Chapter 5 versus 1-20 we get the story of Jesus healing the man with the Legion of demons (and you thought one demon was bad… you know the old phrase: ‘I complained I had a demon until I met the man who had a thousand’ Or, was that about shoes and feet? It doesn’t matter.)

Having a legion of demons is like having head lice. Only the lice are evil, fallen supernatural beings. And, they torture you from the inside out instead of making your head itch.

This story is full of really cool observations:

I think these are all very interesting observations, but something new jumped out at me this morning.

The term ‘begged’ was used twice in this story. The first time it was used by the demoniac in asking for mercy. The second was by the healed man (demon free) who begged to go with Jesus.

Here’s what interesting about that, Jesus honored the request of the demons, but denied this new follower of Christ.

In the voice of  Scooby Doo…huh?

It’s seems to me that mercy/requests begged of Jesus by His followers would be more highly valued than a request from His arch enemies who wish He was dead… hmmm. Maybe this is why I don’t understand foreign films.

You see, I don’t like watching movies where the bad guys win, the hero dies, or some woman finds her inner child and finally comes to terms with the reality of her life and learns the contentment of the ya-ya sisterhoods traveling pants made of friend green tomatoes while kissing Keanu Reeves. Okay, that last part is not really relevant, but the stuff about bad guys winning and heroes dying is.

It doesn’t make sense to me that Jesus would tell the demons yes, and one of His own no. Despite the fact that as a follower of Christ for more than 20 years I have heard Him say ‘no’ to me a myriad of times. So what’s the scoop?

I’m glad you’ve asked! I’ve been wrestling with this one for a few months… try this on and see how slenderizing it looks.

What if we were so consumed with the concept of grace that we missed the call of faithfulness and obedience. I mean, grace is extended to each an every one of us, but once we’ve been washed in the blood, covered by His grace, entered into citizenship, adopted by the Father, ticketed on the J-train, headed ha-ha-heavenbound… what if life is more about being obedient and faithful because of the grace we’ve received.

Not negating the grace that we are given, but understanding that on the other side of cross that’s all we could understand and handle. But, on this side of the cross we are covered and enlightened (to a degree at least) and now bear the weight of Scriptural responsibility. 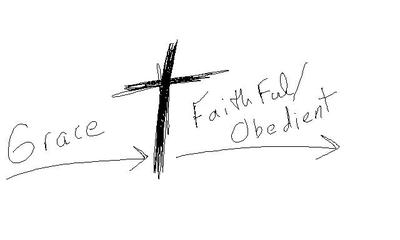 It makes a lot of sense to me when I read the Bible. There are some passages that seem to look like we’re required to do works of goodness, but that flies in the face of being saved by grace… or does it (as I type this last phrase I am raising an eyebrow and looking saucy… can you feel it)?

The entire book of James is an example of this. Here’s just one verse: 14 What good is it, my brothers, if a man claims to have faith but has no deeds? Can such faith save him? 15 Suppose a brother or sister is without clothes and daily food. 16 If one of you says to him, “Go, I wish you well; keep warm and well fed,” but does nothing about his physical needs, what good is it? 17 In the same way, faith by itself, if it is not accompanied by action, is dead.

The Holy Bible : New International Version. 1996, c1984 (electronic ed.) (Jas 2:14-17). Grand Rapids: Zondervan.
I’ve heard lots of interpretation tricks to try and make this verse fit, but it all seems like theological gymnastics. In fact, this book bothered some of our Christian ancestors so much that they took it out of their Bible… I wouldn’t suggest that by the way… bad plan… very bad plan. In fact, Martin Luther was one who thought it was questionable http://www.biblestudy.org/question/luthjams.html .
But, what if it was not a matter of salvation? What if it was a matter of followship? What if James, and many other passages like it, were specific instructions for those on this side of cross where we are now living with a weight of responsibility for the grace we received?
If that’s the case then this and many other passages of Scripture make tons more sense to me. I think it’s a temporal issue… is that verse, passage, story intended for consumption on that side of the cross, or on this side?
If you look at our demoniac story I think we can see the practicality of why Jesus honored the demons requests and denies His followers.
Jesus is full of grace and mercy and extended this even to His own enemy (Legion), but,denied the request of the healed man to accompany Him. Instead, He said go back and serve me where you live and tell others what the Lord has done for you. In other words, no that you’re on that side of cross… be faithful… be obedient… walk in the grace you’ve already been given… bear some weight (I hear my old high school football coach saying “Suck it up, boy”…. quick, go to my happy place, go to my happy place).
According to verse 15 the people were terrified of Jesus and sent Him away, but when this ex-demon told the same story people were amazed (verse 20).
So, it makes sense that He told this man no. It may have been a great thing for him to follow Jesus, grow spiritually and be in fellowship with the disciples, but it was better for the people of Decapolis that he stayed.
You see, sometimes on this side of the cross, God calls us to be the grace others still need on that side of the corss.
When we are covered by grace and call Him Lord, we are saying He has the right to make that call.
What do you call Him, and what side of the cross are you standing on?