I must give credit where it is due.

I have been reading a book by Pastor Steven Furtick called Sun Stand Still. I’m not finished with it so I can’t fully recommend it yet, but so far… pretty awesome (Kindle says I’m 59% finished, so, I give it a full 59% endorsement). 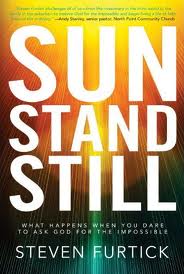 By the way, it may be a while before I finish. It’s a treadmill book which makes it pretty slow going. Highlighting is almost impossible.

One of the great concepts in the book is with worth repeating, but as any even mediocre preacher worth his weight in bulletins knows, you can’t just repeat it. You have to improve it.

One without the other two is pointless. Two without the third is a shame. All three together are a powder keg of spiritual movement that comes from, operates in and produces God stuff in our lives.

The book uses Peter as that quintessential example of this pattern displayed in the life of a believer. Here’s the occurrence from Matthew 14:

Jesus Walks on the Water

22 Immediately he made the disciples get into the boat and go before him to the other side, while he dismissed the crowds. 23 And after he had dismissed the crowds, he went up on the mountain by himself to pray. When evening came, he was there alone, 24 but the boat by this time was a long way from the land, beaten by the waves, for the wind was against them. 25 And in the fourth watch of the night he came to them, walking on the sea. 26 But when the disciples saw him walking on the sea, they were terrified, and said, “It is a ghost!” and they cried out in fear. 27 But immediately Jesus spoke to them, saying, “Take heart; it is I. Do not be afraid.”28 And Peter answered him, “Lord, if it is you, command me to come to you on the water.” 29 He said, “Come.” So Peter got out of the boat and walked on the water and came to Jesus. 30 But when he saw the wind, he was afraid, and beginning to sink he cried out, “Lord, save me.” 31 Jesus immediately reached out his hand and took hold of him, saying to him, “O you of little faith, why did you doubt?” 32 And when they got into the boat, the wind ceased. 33 And those in the boat worshiped him, saying, “Truly you are the Son of God.”

Love this story, and what it teaches us today.

The first thing for us in living out the audacious, miracle working power of God in our lives is to hear what God says. These experienced fishermen were in full freak out mode when they saw some guy taking a stroll on top of the water (Don’t talk smack about the disciples, you would have freaked too). But, before they could all cast lots and through Thaddeus overboard to satisfy the ghosts of the lake (no one ever mentioned Thaddeus anyway), they heard a word: “But immediately Jesus spoke to them, saying, ‘Take heart; it is I. Do not be afraid.’ ”

You and I will probably never hear the audible voice of God in our lives, but we can hear what He has to say with perfect clarity. God’s Word, the Bible, is His voice. If you are wanting to have the amazing power of God work through your life you have to, must, no doubt, undeniably, no other way, have a dedication to knowing the Word. Romans 10:17, “So faith comes from hearing, and hearing through the word of Christ.”

The second thing for us in living out the audacious, miracle working power of God in our lives is to speak what God says. It’s not enough just to know it. We have to speak God’s promises and commands outloud, to ourself and to others. Peter did just that when he said, “Lord, if it is you, command me to come to you on the water.”

When we speak the words, they become real to us, we become accountable to others and we put God’s reputation on the line for the purpose of Him receiving all the glory! That, by the way, is why we need to make sure we are (1) hearing His word and (2) speaking His word… anything less and we’re just playing games.

The third thing for us in living out the audacious, miracle working power of God in our lives is to do what God says. This is awesome, Peter got out of the boat. Can you imagine that moment when Peter suspended everything he knew and experienced. He denied his visual reality for the spiritual potentiality, and he walked on water!

Without this third step, it’s all just head games. Hearing and speaking without action are the steps that cause a disbelieving world to call us fools and hypocrites. The problem is, without a good dose of “do something,” they are right.

Now, here’s where my improvement makes it’s appearance. Many people discount this story, or think of it as failure, because after a step or two on the water, Peter lost it.

But, when he saw the wind, he was afraid, and beginning to sink…

I’ve heard many a preacher drone on and on about “Poor Peter, if only he had more faith.”

Poor Peter? The dude walked on water! What have you done today?

The problem is that we see this episode in Peter’s life as the goal, but it wasn’t. Peter was NOT born to and called for the purpose of walking on water. God had much bigger plans for him. Walking on water was just one of the miracles on the road to his purposeful destination.

God was training, molding and re-inventing Peter to become a tool in His hand that would make walking on water look like a high school play on the Broadway Strip!

Peter walked on water! Sure he only made it a few steps, but it started him down a road that lead to maturity, faith and the explosive power of God:

Acts 2:40 And with many other words he bore witness and continued to exhort them, saying, “Save yourselves from this crooked generation.” 41 So those who received his word were baptized, and there were added that day about three thousand souls.

Acts 3:6 But Peter said, “I have no silver and gold, but what I do have I give to you. In the name of Jesus Christ of Nazareth, rise up and walk!” 7 And he took him by the right hand and raised him up, and immediately his feet and ankles were made strong. 8 And leaping up he stood and began to walk, and entered the temple with them, walking and leaping and praising God. 9 And all the people saw him walking and praising God,

Acts 4:13 Now when they saw the boldness of Peter and John, and perceived that they were uneducated, common men, they were astonished. And they recognized that they had been with Jesus.

Acts 9:40 But Peter put them all outside, and knelt down and prayed; and turning to the body he said, “Tabitha, arise.” And she opened her eyes, and when she saw Peter she sat up. 41 And he gave her his hand and raised her up. Then calling the saints and widows, he presented her alive. 42 And it became known throughout all Joppa, and many believed in the Lord.

Acts 5:12 Now many signs and wonders were regularly done among the people by the hands of the apostles. And they were all together in Solomon’s Portico. 13 None of the rest dared join them, but the people held them in high esteem. 14 And more than ever believers were added to the Lord, multitudes of both men and women, 15 so that they even carried out the sick into the streets and laid them on cots and mats, that as Peter came by at least his shadow might fall on some of them.

Step out in audacious faith today. Go big and see what God will do, that only He will do.

But, never forget that the miracle God is producing in your life today is only preparation for the one He has for you tomorrow!

Walk on water today with no fear of sinking after a while. You most likely will.

Walk on water today, so that God’s glory might shine so brightly about you tomorrow, you’ll cast a shadow worthy of eternity.