It’s been one of those months. Everything I read, listen to and talk about seems to have a common theme.

I should be excited, because when that happens it’s almost always God trying to speak.

Although there is a bit more depth to it than this, the nutshell idea from the Lord is simply this… it’s more about Jesus than you think.

Colossians 1:27 To them God chose to make known how great among the Gentiles are the riches of the glory of this mystery, which is Christ in you, the hope of glory.

My first conversation with a CrossPointer back in the states (vacation in Costa Rica, awesome, by the way) was another example of this reoccurring theme.

A friend had been reading the Old Testament, kind of for the first time since hearing the sanitized versions in children’s Sunday School years ago. It’s hard to show David finishing off Goliath with a bloody decapitation on flannel board in children’s church, so, we generally stop right before that.

But, now he’s diving into all the gory details and is 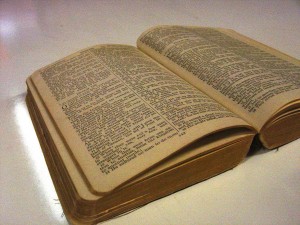 struggling with the brutality and sternness of God in those stories. That’s legitimate, but why do we struggle with the Old Testament so much?

First of all you need to understand that you are not alone, nor are you in a new circle of thought if you have ever wondered, “What’s  with the Old Testament anyway?”

In the middle of the 2nd century A.D. there was a break off movement in the church called Marcionism which entirely rejected the Old Testament. They claimed it was not the same God and they chose to only accept the New Testament.

For this, and probably many other reasons, they don’t exist anymore, but the questions they had are still questions we have today. By the way, there’s absolutely nothing wrong with having questions.

True,  the Old Testament is not the quintessential picture of God’s love, mercy and grace we see in the New Testament. But, the truth is this has much more to do with our definition of love than with God having some kind of conflicted nature.

In the Old Testament, we see a God of wrath, justice, anger, vengeance and severe consequences. But, do not miss the mercy hidden in these stories as well. God’s justice is never flippant, it is never baseless, it is always a waited for, endured, prolonged and delayed sentence passed upon individuals or peoples who have willfully defied, repeatedly, the Word/instruction of the Lord.

The prophets screamed, “Turn, run… or else!” These were warning shots fired by God again and again.

Then we read of God’s acts of justified justice and are confused, shocked and feel betrayed.

As parents, we have standards for children. We provide them with expectations and responsibilities. We warn them that continued disobedience will have consequences in two forms.

First, the natural process of their disobedience will bring its own heartache. We warn them the results of touching a hot pan will be a burn… consequences.

Second, we ensure them that continued neglect of our word will eventually bring punishment… consequences.

Because we know them, love them and know more than they do!

Disobedience requires correction. Anything less and we are unloving, weak-willed parents who care more about personal peace than correction. We become people who want our kids to be our friends more than wanting to create/forge strong adults. We become parents who give in to children allowing them to wander where they want, whine until they are catered to, and allowed to do what is right to their own eyes… not because of our love for them, but because… it’s easier.

Maybe we have trouble with a tough, disciplinarian of the Old Testament because we want Him to be the kind of parent we are.

Psalm 51:8 Let me hear joy and gladness; let the bones that you have broken rejoice.

Genesis 15:13 Then the Lord said to Abram, “Know for certain that your offspring will be sojourners in a land that is not theirs and will be servants there, and they will be afflicted for four hundred years. 14 But I will bring judgment on the nation that they serve, and afterward they shall come out with great possessions. 15 As for you, you shall go to your fathers in peace; you shall be buried in a good old age. 16 And they shall come back here in the fourth generation, for the iniquity of the Amorites is not yet complete.”

The seemingly vicious nature of the Old Testament as “God’s people” rolled through the promised land was a response to 400+ years of God meeting with and waiting for a rebellious and pagan people to respond to Him. God refused to  give Abraham what he had promised simply because he was preoccupied with mercy for the Amorite people.

All the while, forcing His own children, the descendants of Abraham, to play a generational waiting game in slavery in Egypt.

Why did God the latest promise for the chosen Hebrew people? Because God was not done displaying His mercy toward the Amorites!

Yet it is difficult for us when reading the Old Testament because all we can see is the sever and graphic punishment, but don’t miss the centuries of mercy!

Still, this mercy is so much clearer in the New Testament. Why is it so easy to see, picture and perceive this grace in the Gospels and beyond?

In a word- Jesus!

In the New Testament, the wrath of God was satisfied, and justice meted out, His anger diffused by pouring it all out on the innocent and the only One capable of bearing, surviving and overcoming the weight of punishment of all time for all the sins of all the people in the world… Jesus.

Romans 3:23 For everyone has sinned; we all fall short of God’s glorious standard. 24 Yet God, with undeserved kindness, declares that we are righteous. He did this through Christ Jesus when he freed us from the penalty for our sins. 25 For God presented Jesus as the sacrifice for sin. People are made right with God when they believe that Jesus sacrificed his life, shedding his blood. This sacrifice shows that God was being fair when he held back and did not punish those who sinned in times past.

It’s all about our sin.

God’s anger, severe actions and Old Testament fury are because of and entirely in response to our rebellion, neglect and sin. These completely just attributes of God are seen with crystal clarity in the Old Testament because they are chronologically prior to Jesus, the cross, the grave and the resurrection.   Also, the coming of the Holy Spirit which enables us to see with more Godly eyes does not happen until after the resurrection of Jesus Himself.

Grace, mercy and love are in high def in the New Testament era because Christ has become the spiritual shock absorber soaking up all the wrath and judgment of the world while on the cross, taking our punishment to the grave.

The resurrection is proof we can find protection, forgiveness and hope in Jesus!

The name of Jesus splits the Old Testament from the New Testament, and proves that there is one God in both halves of this book.

Jesus splits the Testaments and ties them together at the same time.

He portrays a God who is just yet loving, strict yet forgiving, a disciplining father and a loving “Abba” daddy.

There is an Old and New Testament, but only one Word.

There is a righteous Judge and a loving Father, but only one God.

There is an uncreated Creator and incarnate baby Savior, but only one Jesus.

It’s more about Jesus than you think.

27 To them God chose to make known how great among the Gentiles are the riches of the glory of this mystery, which is Christ in you, the hope of glory. 28 Him we proclaim, warning everyone and teaching everyone with all wisdom, that we may present everyone mature in Christ. 29 For this I toil, struggling with all his energy that he powerfully works within me. The Holy Bible: English Standard Version (Wheaton: Standard Bible Society, 2001), Col 1:27–29.
Have mercy on me, O God, according to your steadfast love; according to your abundant mercy blot out my transgressions. 2 Wash me thoroughly from my iniquity, and cleanse me from my sin! 3 For I know my transgressions, and my sin is ever before me. 4 Against you, you only, have I sinned and done what is evil in your sight, so that you may be justified in your words and blameless in your judgment. 5 Behold, I was brought forth in iniquity, and in sin did my mother conceive me. 6 Behold, you delight in truth in the inward being, and you teach me wisdom in the secret heart. 7 Purge me with hyssop, and I shall be clean; wash me, and I shall be whiter than snow. 8 Let me hear joy and gladness; let the bones that you have broken rejoice. 9 Hide your face from my sins, and blot out all my iniquities. 10 Create in me a clean heart, O God, and renew a right spirit within me. 11 Cast me not away from your presence, and take not your Holy Spirit from me. 12 Restore to me the joy of your salvation, and uphold me with a willing spirit. The Holy Bible: English Standard Version (Wheaton: Standard Bible Society, 2001), Ps 51:1–12.
http://en.wikipedia.org/wiki/Marcionism

2 Replies to “So, what’s with the Old Testament”