The following is a guest post from a good friend and fellow laborer in our faith community: CrossPoint Church.

Ryan Wray just returned from the mission field in Africa after three weeks of service, and offered this to me as a ‘thought.’

I thought it was valuable enough I should share with you. Yes, I did get his permission!

Thanks a ton, my friend.

I’m not sure if it’s our DNA or if it’s just the way we are wired, but as humans we love completing things. It’s such a great feeling when we put our minds to something and then finish it.

There’s just something about seeing a zero balance, or a paid in full, or a completed stamp that just gives us a wonderful feeling. I know for me, being a procrastinator, that seeing something finished is a huge achievement. 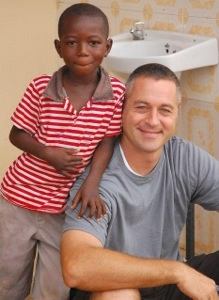 This last Friday, I could start to feel something in my body that I knew was probably some sort of illness. My wife was ill two days prior and I knew it was probably just my turn.

Sure enough, from Friday afternoon until Sunday morning I had some sort of bug. I knew it was over Sunday morning because when I woke up, my entire upper torso had broken out in a rash.

This wonderful phenomenon called anaphylactic shock is something that happens to my body at the end of every illness I get.

I have no idea why it does it or what it is doing, but is a sign of completion.

I think that many Christians have this same feeling with their spiritual walk. Once we accept Christ, it is finished. He has died for our sins and now that we let Him into our lives, He will take care of everything and we can sit back and enjoy life.

The hard part is done, right? All we have to do is believe, and our lives will be complete!

You and I can get a chuckle out of this mind set. If we heard somebody say this, we would probably chuckle, then pause to ask, “Are you serious?”

I still consider myself a young believer. In the short three years since I accepted Christ, been baptized, and continue to grow my relationship with Christ, I have yet to find a place in scripture that says, “since you’ve gone”. If we continually look for goal lines or finish lines, I think we’re going to be greatly disappointed.

Instead, I am daily reminded of scripture that says “As you go…” So, how do we know where we are suppose to go? How are we supposed to know what to do?

I think it’s easy to take this from scripture and think “as you go” is a representation of missions. But, missions where? Missions how? Where do I go? How do I get there? How do I know what Christ is calling me to do?

One of my favorite scriptures is Matthew 5:16:

“In the same way, let your light shine before others, so that they may see your good works and give glory to your Father who is in heaven.”

What does it mean to let your light shine before others, and how does this apply to my walk with Christ?

When I arrived in Togo, Africa, a few weeks ago, one of the first things they told us was to make sure we carry a flashlight at all times when walking at night.

I was fine with this until they told us why. The statement following was, “Because of the large number of black and green mambas, you may want to pay a little bit better attention to where you’re stepping.”

This just took my three week stay to a whole ‘nutha level! I hate snakes so much, that when I see one I just about throw up all over myself! So, for the next three weeks, everywhere I went from sundown to sun up, I carried my flashlight with me.

Now, when I say to carry it, what I really mean is I tried to light up the entire campsite with my one little flashlight because the last thing I wanted to see was a snake. If there was a snake anywhere within a 100 foot radius of me, I wanted to know it!!

This seemed like a fantastic idea until the third night I was there. I was walking with a group of nationals and Americans headed back to camp from visiting a family when my sporadic pivoting of a flashlight was abruptly interrupted by some words from the nationals that can be translated in French, Moba, or English all the same.

As I was shining my light everywhere around me, I almost stepped on a green mamba that was right in front of me. I quickly realized that the light does me no good unless I shine it at the path in front of me.

This was one of those “ah ha” moments because as a young Christian, many times I don’t know what path to take. I’m excited for this new relationship with Christ, but do I really pay attention to where He is calling me to go? Am I trying to follow a path that I think He wants me to go? Or, am my truly being led by the Holy Spirit in a direction that is going to be a light that shines before others?

I can’t be sure that I know the answer to this, but one thing I do know, is that whatever path Christ puts me on, it only has one finish line and that is the Kingdom.

I picture myself continuing to walk a path that may have a fork in the road, but each one of those paths starts off with a sign that says “As You Go…”