I’ve had a project in the back of my mind for a while.

I have written a short children’s story about a boy named Blotch who lives among a people stained by their own lives. It’s an allegory for the Gospel and is intended to create discussion between you and a kiddo about God’s goodness, our sinfulness and the blessing of Jesus.

It’s five chapters of young Blotch’s journey and includes a family discussion guide for each chapter.

I’m including the first chapter and discussion guide for the CrossEyedLife community to read, pray about and help me process. In later chapters, Blotch runs into the secret keepers of Hiderville, the frustration of those in Pretendville and the scary tempers of Blameville. This is all before he finally meets… the King.

Anyway, here is a taste. I look forward to hearing your thoughts! 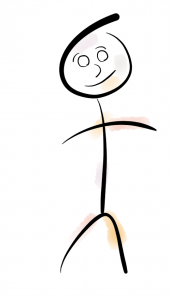 It’s not that he liked the way he looked; in fact it was just the opposite. He would spend every evening trying to race the vanishing light of the sun as he counted all the spots and stains upon his face and body. But, like every other day as the light faded, his mother called him to dinner and he would run home.

He could never get to the end of his counting, there were just too many stains.

Blotch was not born with all his stains, none of his people were. Each person began their life with only one small mark, but the number of stains grew and grew all the days of their lives.

The stains were no mystery. Everyone knew where they came from.

If you told a lie, a stain appeared.

When you said something mean, there was another spot. 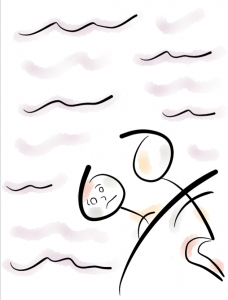 Whenever anyone was bad, mean, or just did something wrong another stain would appear. Even the best people Blotch knew had their own stains!

No one could tell what caused a specific stain on someone else, but everyone knew that whatever caused it wasn’t good. No one liked them, but no one knew what to do about them.

Tonight Blotch would not solve the problem of the stains, because off in the distance he heard his mother calling him home. It was time for dinner.

Around the table with his father, mother and two older brothers, Blotch sat quietly while everyone talked about their day. They shared stories of bullies at school, mean conversations at work and rude people at the store. These were the kinds of things stained people talked about.

Blotch didn’t say a word. That is, until his mother turned to him and said, “Well, my little Blotch, why so quiet tonight?”

With a shaky voice and some tears in his eyes, Blotch changed the conversation and spoke loud enough for everyone to hear, “How do we get rid of the stains?”  Every voice around the table went silent, and every eye in the family focused on little Blotch.

“I’m tired of the spots, the marks and the stains, I want them to go away,” said Blotch. The look in his eye and the tone of his voice showed that he didn’t know whether to cry or be mad.

His oldest brother was the first to speak and in an angry tone he said, “Oh be quiet Blotch, everyone’s got them.” 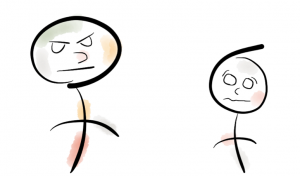 As he spoke those words, a faint little spot appeared just under his left eye, probably because he spoke so rudely. Blotch’s middle brother didn’t say a word, but Blotch wondered what the look on his face meant.  When a stain appeared on the end of this brother’s nose, Blotch knew he must be thinking hateful things about him.

Just then, Blotch’s father took control of the conversation saying, “Now, now Blotch. You’re brother is right, stains are just a part of life and you need to learn to live with them like everybody else.”

Blotch didn’t want to live with the stains, and even though he didn’t know why, deep down inside he believed they were not meant to have them.

He was a little embarrassed by the conversation and thought he might be a little angry at his brother. When he saw the new spot on his left wrist, he knew he was not thinking nice thoughts.

Blotch pushed away from the table only to walk over to his father and crawl up on his lap. He thought their conversation might be a little more private this way. “Daddy, what if there was a way we could get rid of the spots?” Blotch asked. 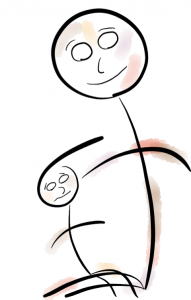 “Well, that would be just wonderful my little Blotch, but how in the world could that ever be?” said his father.

Blotch could feel his stomach tighten up, because of what he wanted to ask his father. He thought about his plan almost every night while sitting by the pond counting stains.  “Daddy, what if someone knows how to get rid of the stains? What if someone in one of the other villages knows what to do? What if the King of the kingdom could make them go away?” Blotch asked, sitting up and wiping the tears from his own eyes. He looked right at his father, and bigger than he had ever been, asked one more question.

“Daddy, would you let me go on an adventure to see if someone knows how to get rid of the stains?”

Blotch’s heart pounded like thunder as he sat in silence waiting for his father’s answer. Even though it was just a few seconds, it seemed like an hour.

This time, the tears were in his father’s eyes. Even though Blotch was too little for such a journey, his father new he had to try and find the answer.

Little Help: Sin is a word that means to miss the mark. The best way to illustrate it is to think of archery. If you shoot an arrow at a target and hit anything other than deadcenter, you missed the mark, or you sinned. When we sin, it’s simply missing the mark God has for us and that is why everyone has sinned.