I know math is easier for some than others, but at some level everybody must admit, math is hard. 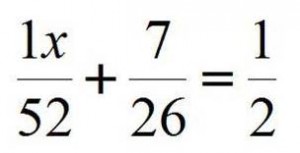 Some fall off at trigonometry, others with calculus, and some algebra. For me, saying I fall off at algebra is a stretch. I capped out somewhere near fractions.

My kids lost some of their innocence in the sixth grade. I stopped appearing to be the all-knowing, ever-flowing fountain of knowledge when they brought home math homework.

We needed a tutor two nights each week. One night for them, and one for me.

Still, there is one lesson from the math universe I’ve never forgotten; the quest for the one common denominator.

A common denominator is defined, as found on the ironically named mathisfun.com website, “denominators (or the bottom number in a fraction) in two or more fractions that are common, or the same.”

I remember grueling hours of scrawling down numbers, erasing them and trying to find that one common denominator.

Finding the one common denominator meant you had simplified the equation and were seeing it as clearly as you possibly could.

This is a skill I wish we could use outside the world of math.

If we’re honest with ourselves, we might discover that one common denominator that keeps turning up in so many aspects of our lives.

As a pastor of more than 20 years, and an observer of life and all its ups and downs, I think I can clearly say that most people who have multiple problems… actually don’t.

Consider, when we think we have multiple problems, what if we actually have a single problem multiplying itself in our life. A common denominator that is affecting everything else:

If you look closely, you may be able to reduce the above scenarios down to their common denominator. For example, it’s not very likely that every teacher you’ve ever had has been out to get you. But, the one common denominator in every classroom you have been in… well, there’s no easy way to say it, is you.

Without a doubt, I have seen myself as the one common denominator again and again. When my kids are irritating, my wife misses the point and everyone at the church just doesn’t understand… I probably need to reduce the equation.

For whatever reason, it’s me again. The one common denominator.

If you suspect you may be the one common denominator, one way to turn it around is to remember Romans 12:13, “For by the grace given to me I say to everyone among you not to think of himself more highly than he ought to think, but to think with sober judgment, each according to the measure of faith that God has assigned.”

Cut the world around you a little slack, and make sure you hold yourself accountable for things like humility, courtesy and respect.

Wake up every morning remembering that we are all sinners, lost without the grace of Jesus and needing to be transformed by His resurrection power.

You can’t do anything about the world around you, but you can confess your sinfulness, you can surrender to the Savior and you can take care of at least one thing… one common denominator.