Today has been marked by a little bit of panic.

Nothing overt, no obvious danger, just something in the air. And, I know what it is…

I’ve already caught myself staring into space, catching my breath and grinding my teeth.

You see, today my youngest son becomes a teenager, but that alone is not really the source of the feeling.

Some tell me that I should really be concerned, having two teenagers in the house is going to be a war. I don’t think I agree. 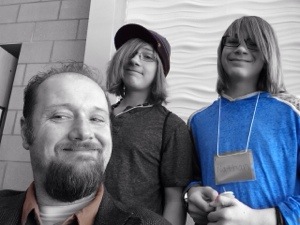 I’ve been warned to hold on tightly because time will go so fast I’ll miss it. Well, making the most of every opportunity is wise, but I don’t think that’s my worry.

Moms tell me with tear-filled eyes that you’ll never get your babies back. They mourn over the loss of a baby to cuddle with… believe me, that’s not my problem.

Dads tell me I should get a second job, because the amount of food that’s going to be consumed will break the bank. Actually, I kind of believe that one a little.

With all of the good, bad and ugly advice that you are given, unsolicited I might add, as a parent… it’s sometimes hard to filter out what should be held onto versus what should be tossed.

However, on this occasion, I’m pretty sure I know the source of my consternation.

I am not longing for bygone days, wishing that Noah and Nathan were just entering kindergarten again so I could relive those precious moment years. Been there, done it, have the t-shirt.

I am not overwhelmed with fears that time will slip by so quickly I’ll miss something. We’re taking lots of pictures.

I am not suffering from stress due to the costs of raising a teenager and setting them in the world on their own. I know how to use the words “Get a job.”

I am not struggling under the weight of a horrific culture, unseen peer pressures, inevitable empty nest, or any other thing that gets blogged on a regular basis.

In fact, my “fear” isn’t even really a fear at all. It’s an adrenaline shot.

If you’ve ever known that moment right before a fight, you know when you’re squaring off in the parking lot and staring each other down… that’s the feeling.

But, it’s not squaring up against my sons, but with them!

I have spent the last decade and a half hovering over them, protecting them, leveling a path before them. And today, I do not mourn the transition that they are going through.

My boys have become young men, both of them now. And many of the battles that will be fought now, I will no longer fight for them, I will fight with them.

Where I had been standing between them and the things that might do them harm, now we will stand back to back fighting for what we believe and standing up together.

With two boys that are now young men I am moving in a new direction of fighting ‘for’ my family, to fighting ‘from’ my family.

I know they’re not completely mature, and there is still growth to come… but, my boys are now men. And, that jittery feeling I have is one of anticipation.

The battle lines are drawn, and the conflict is clear. No longer do my boys need to hide behind their father, but side-by-side, swords drawn in the strength of the Lord has given them it’s time for them to become the warriors and the men I know they are.

I am more than proud to call these boys, young men.

I am honored to share my last name with them.

And I am itchin’ to hit the battlefield with them.

Their mother and I have taught them the Scriptures as best we can. We have modeled out a life of faith to the best degree that we know how. And with everything that we could, we have trained them up in the way they should go.

I know we’ve made plenty of mistakes, but we’ve given them our absolute best.

Welcome to the fight Noah.

Psalm 119:9 “How can a young man keep his way pure? By guarding it according to your word.”