I love being a Kansan.

Maybe that’s why I don’t mind being designated a flyover state.  We can just let those folks on the coast fly back and forth to each other, and will just keep on being Kansan.

I’m a strange one to make that statement, since I was born in a suburb of Los Angeles, but there’s very little about this state I don’t appreciate.

However, there is one peculiar trait of Kansans that still baffles me. When the clouds are dark and dreadful looking, the forecast warns of impending danger and the sirens start screeching through the skies… that’s when we all go outside and start looking around.

You have to admit, that’s not really a very bright thing to do. But, I guess that makes us Kansans. 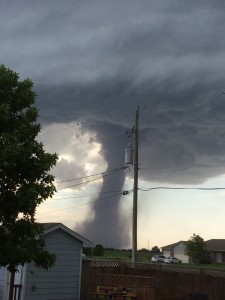 I’ve been told we all channel our inner storm chaser in those moments because that kind of weather is so common ‘round these parts.’  I suppose that’s true.

But sometimes, it’s familiarity that gets you in trouble. Sometimes we forget to respect the danger. Sometimes we act foolishly because we’ve  danced so close to the fire without getting burned, we think were fireproof.

Quite possibly, being that unaware of reality is probably the most dangerous trait of all.

Unfortunately, that trait is not limited to Kansans and their views on meteorology. Humans by nature  are a people that ignore very real danger until it’s almost too late.

Spiritually, every single one of us is a mess. If you’re human, if you can still breathe, then you have issues. Romans 3:23 says, “For all have sinned and fall short of the glory of God.”

That word sin is a bigger deal than we think. Romans 6:23 says,  “For the wages of sin is death, but the free gift of God is eternal life in Christ Jesus our Lord.”

Sin has become a religious term but originally it was athletic and nature. It was an archery term that meant you had missed the target.

When you miss the target and relationships things fall apart. When you fall short of the goal in life you pay consequences. And when you swing and a miss, chunk an airball, or drop the pass spiritually it has dire consequences in this life, and the next.

But there’s good news! 1 John 1:9 says, “If we confess our sins, he is faithful and just to forgive us our sins and to cleanse us from all unrighteousness.”

We’ve been given a warning system, a safe place to go to and a promise we can make it through the storm of this life.

You may choose to keep being Kansan and post those pictures of scary storms that you should have only seen through a basement window, but don’t  take the same chance with this even bigger storm.

Take  your spiritual life seriously. Honestly look at your own actions. And thankfully respond to a God who has nothing but grace for those who turn to Him.

This storm may be closer than you think.

________________
Special Thanks to the Hutchinson News for publishing this article in the Faith section.