There has been a quest over the centuries by some of the great philosophical and engineering minds to come up with a perpetual motion machine. Something that once started, is powered by the energy it produces itself and would never have to stop because it is completely self sustaining.

No degradation of power, a leak proof passage of energy from one motion to the next. 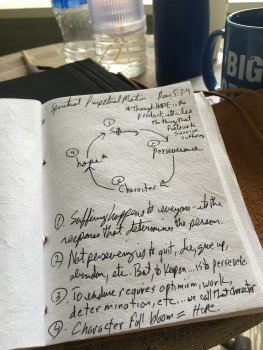 An automated marvel that would have the potential to change with world by meeting global energy needs for virtually no cost.

Yeah, I’ve got nothing.

Wish I could help there, but I did find a bit of that logic in a passage I studied this morning, which I visualize as a spiritual perpetual motion machine.

Romans 5:3-4 says, “Not only that, but we rejoice in our sufferings, knowing that suffering produces endurance, and endurance produces character, and character produces hope.”

So, step one: suffering produces endurance. This is kind of a no brainier, because suffering that doesn’t produce endurance produces death. I mean, if you don’t endure, you die. In this case, we can suffer on many fronts, and you can either persevere, or you can die. The death of a dream. The death of a calling. The death of a relationship. Or, in that very same suffering you can endure, persevere, overcome. 1 John 5:4 sets every believer up for this kind of victory: “For everyone who has been born of God overcomes the world. And this is the victory that has overcome the world—our faith.”

Step two: endurance produces character. Think about it, when we say someone has character we aren’t actually saying very much. Everyone has character. But, what we mean, is we see character quality traits that are worth holding on to: faithfulness, determination, optimism, hard work, etc. It’s in the process of clinging to God in the middle of suffering, enduring through it that these qualities rise to the top. Those who don’t endure often succumb to a different list: doubt, negativity, weariness, etc. So a person who endured suffering truly becomes a person of character.

Step three: Character produces hope. Let me supply my own definition of hope here (feel free to argue, but I’m not changing it). Hope is a confident expectation of the not quite yet, just out of reach, but already a fact to me! A person with all those positive character traits listed above will find themselves clinging to hope like it’s already in the bag. What others call a wish, they call tomorrow. When others are on a wing and prayer, they are guarded by angel wings praying thanks to a God who has ‘already’ answered their prayers.
Now, here is where it gets weird, because it looks like “hope” is the last stop on this train from the passage I’ve quoted above, but there actually is a step four.

Step four: Hope fuels faith to make it through suffering. Yes, in an amazing twist of reciprocity, the very thing that suffering produces, is also the fuel needed to overcome it. From the very same passage, just one verse later:

Romans 5:5 says, “Hope does not put us to shame, because God’s love has been poured into our hearts through the Holy Spirit who has been given to us.” The hope streaming from Godly character, forged by enduring, that’s heated by the fires of suffering is the same hope that will help get you through!

God poured into you in the beginning creates the opportunity for God to be poured out of you in the end… a spiritual perpetual motion a machine. That’s why the very beginning of the passage says one of the craziest things in the Bible: “But we rejoice in our sufferings.”

It makes no sense until we understand that as we walk through, suffer, lean more into our God, and feel the presence of His spirit more and more, we are given what we need to make it through.

Everyone suffers, but not everyone overcomes. We can rejoice, because we have a God who is not overwhelmed, discouraged, or out of His depth.

If you’re going though something right now, remember, you can’t do it.

But, God in you can do anything.