I have had the same haircut for 17 years.

First, I know this because I cut off the rebellious ponytail of my youth the same week my first son was born, and he’s 17.

Second, no comments from any of you about not having hair options because of the ‘limited resources’ I am working with as of late. I am aware.

So, back to the beginning. I have had the same haircut for 17 years.

I was pondering this recently as my son and I went for haircuts together. He sat in the chair first, giving direction for the new thing that he desires for the massive mane that God has given him. If you’re picking up on a scent of jealousy…oh yeah, it’s there.

While he was explaining his complex cut I was reflecting on the many iterations of his ‘do.’

As a toddler, he had a mullet. I know some would say that’s abuse, but he saw pictures of me in college and wanted “a haircut like daddy.” Come on, who is going to refuse that?

Then, he had the typical toe-headed little boy cut.

As a preteen, he morphed into a mop that could shame the Beatles.

Out of nowhere, a couple of years ago came the high and tight athletic cut (he looked all the stud). 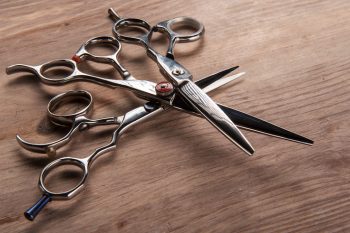 And, now he’s doing this… thing. I don’t quite understand it: white wall sides and back, then long on top down the middle. We’ve already had the talk that if I ever see the man bun, he’s homeless.

They finished up, and I have to admit he can make any head of hair look good. There’s that jealousy again. I’ll pray about it.

Next, I climbed in the chair, and it’s funny. I don’t recall any conversation. She just started cutting.

Like I said, I have had the same haircut for 17 years.

Maybe I am not just jealous of Noah’s luscious locks. Maybe I am a little jealous of his willingness to take risks. And, I should be.

I think God blesses and encourages the risk taker.

Matthew 25 contains one of the most interesting parables in Scripture concerning a master, his servants, and entrusted resources.

Let’s talk about this in 21st-century terms. The boss goes away giving one guy five bucks, another two bucks, and another one buck.

He gave it to them according to their ability. That’s an interesting note, isn’t it?

The guy with five went out and traded his dollars, doubled down and cashed in big. The guy with two did the same. But, the guy with one went very safe.

He hid it, buried it and protected it. So when the boss came back he could say there was no loss on his watch.

But, the boss’ response was to praise the risk takers and the cautious, conservative operator he called, “You wicked and slothful servant!”

I think the theological term for that is, yikes.

Apparently, the Boss (with a capital B) is looking for the risk takers.

I think that believers today, and consequentially the church, have confused faith with fear, stewardship with doubt, and holiness for the status quo.

We need Godly risk takers who know that betting on God is always a good bet. Who is willing to go big, because there is nothing more important than the calling upon us?

God’s has given us much, so let’s take a flyer. Life’s too short to play it safe.

In fact, I think I’m going to get a mohawk. Well, maybe a reverse mohawk. Just using what I got!

This article was originally published in the Baptist Digest… you should check it out: