One Body, Many Parts

﻿12﻿ The body is a unit, though it is made up of many parts; and though all its parts are many, they form one body. So it is with Christ. ﻿13﻿ For we were all baptized by﻿a﻿ one Spirit into one body—whether Jews or Greeks, slave or free—and we were all given the one Spirit to drink.

﻿21﻿ The eye cannot say to the hand, “I don’t need you!” And the head cannot say to the feet, “I don’t need you!” ﻿22﻿ On the contrary, those parts of the body that seem to be weaker are indispensable, ﻿23﻿ and the parts that we think are less honorable we treat with special honor. And the parts that are unpresentable are treated with special modesty, ﻿24﻿ while our presentable parts need no special treatment. But God has combined the members of the body and has given greater honor to the parts that lacked it, ﻿25﻿ so that there should be no division in the body, but that its parts should have equal concern for each other. ﻿26﻿ If one part suffers, every part suffers with it; if one part is honored, every part rejoices with it.

I am learning a lot from my body lately. Not by choice, probably because I was never a willing student in the first place. Nonetheless, I have some valuable lessons being heaped upon me.

That is, unless Kathy’s around and then I lay it on thick because she is awesome with the neck rubs. No one forward her this article… don’t ruin this for me!

And, more recently, I have learned other lessons from the broken (or, as my doctor described it, the 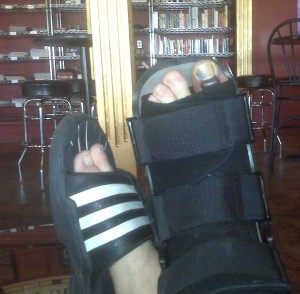 shattered and fractured) big toe. That one will get you to slow down in a big hurry whether you like it, or not.

By the way, nothing is as sexy as an ankle high medical boot… Grrrrr….

Yep, God is really teaching me some new stuff head to toe.

I have to admit, I never really paid attention to my big toe until now, but as of last week he has my full attention. Each day I would say goodbye to him as I slipped a sock over him and shoved him in a shoe, never asking his permission. He was kind of like a daily kidnap victim being hooded and thrown in the trunk of a car and driven around all day.

But, now he is center stage (no, I don’t know why I have made my big toe a he and a not a she? Probably because it would make me uncomfortable to shower with it if I didn’t).

Now I gingerly place him in an open toe medical boot.

Now I swing him far out of play whenever dancing children enter the room.

Now I prop him up on footstools, other chairs, coffee tables, desks, and other people whenever I get the chance. Doctors orders.

Now I and everyone I talk to spend part of every conversation gawking at him, discussing him and reviewing his situation.

With every move I make I am reminded that the doctor told me, you don’t take a single step without that big toe providing support, direction and thrust.

Too often we don’t know what we’ve got until it’s gone (80s power ballad by Cinderella… not an endorsement, just a fact).

Then, just a few days after the healing, and he loses his star status… it’ll be back in the hood and shoved in the trunk. Stuck in his life of stinky anonymity.

It seems a shame, but this is the metaphor of the church as well.

Not many would aspire to be a toe, which is understandable. But, remember what Scripture says: ﻿﻿ “But in fact God has arranged the parts in the body, every one of them, just as he wanted them to be.“

Thats’ why when a toe goes AWOL and wants to be a hand, the whole body suffers!

In the church we sometimes suffer from the disease of MBP (Migrating Body Parts). But, we need to understand that whatever our function is in the body of Christ… that function is essential!

Once again, God’s word says, “On the contrary, those parts of the body that seem to be weaker are indispensable.”

So, this really means two things for us: first, if you are not serving the local church somewhere you are crippling it. I know from experience, it’s nearly impossible to get around when “That Little Piggy” is gone to market. Get in the game! Second, if you are serving, know that wherever you are, your position is ultimately important to the health and balance of the entire body. Stay there and stay strong. You are essential!

I’ll write more later, but right now it’s time for me to go wee, wee, wee all the way home…

3 Replies to “Lessons from the Little Piggy gone to market”