There is an old saying that opposites attract.

Often it is used in the awkwardly romantic, Paula Abdul-esque way to describe how couples…er, compliment one another.

I guess it does happen from time to time, but honestly, I think the more common occurrence is in the attraction of opposites that truly are opposite. They don’t complement each other, in fact, they don’t even like each other. But, despite their disdain for one another they end up being just like the other.

Just plug in any rivalry and you’ll see what I’m talking about. When opposites attract it usually is not a marriage of convenience, or even compatibility. Yet, it’s often amazing just how similar those opposites can be.

This is a common theme in Scripture. So often we think that one thing is opposite another, but the truth is they are more closely associated than we ever hoped or dreamed.

Check out this verse from the book of Proverbs:

Proverbs 18: Whoever is slack in his work is a brother to him who destroys.

If you just take these two ‘characters’, on the surface they appear to be polar opposites. On one hand you have the destroyer, and on the other you have the slacker.

In most of our minds we would take these two individuals and put them on opposite ends of a continuum.

Funny though, the Bible doesn’t do that, at all. In fact it says quite clearly that the destroyer and the slacker are brothers. In other words, the active evil doer is a blood relative to the do-nothing/don’t get involved kind.

If you’re like me and you probably thought these two were complete opposites, well,  maybe they are… opposites attract! 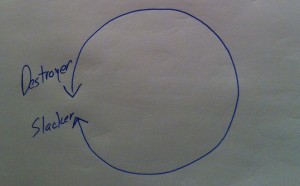 It’s a bit difficult to believe, but since the Bible indicates that an active destroyer is just about the same as a do-nothing slacker we are still looking for the opposite of the destroyer?  Which then, of course must be the same thing that’s the opposite of a slacker.

The true opposite here is equally distant from being both a destroyer and a slacker. If I can come up with a new term: it’s a hard worker/builder upper.

In other words the opposite of destroying isn’t doing nothing, and the opposite of slacking isn’t tearing down. The  opposite of them both is equally different from either: not a destroyer but a builder/encourager, and not a slacker but an engager/provider. 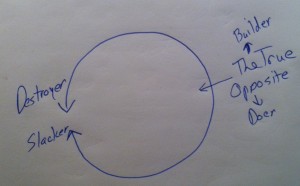 Why is this even important?

Because we have a Christian culture that has the wrong mindset about what it means to be godly. We think that being godly means not doing anything wrong, you know the opposite of being evil.

Unfortunately though, oftentimes not doing anything wrong is the blood relative of doing something wrong. More often than not, sitting still in the kingdom of God is not the answer.

Godly does not mean simply the opposite of wrong, because you can do that by simply doing nothing. Being truly godly is more than not doing wrong, it’s doing right.

This same book of Proverbs that we’ve been looking at is filled with examples.

It’s not just good enough to remain silent, godly people speak out for what is right.

It’s not just good enough to pray for someone, godly people intervene whenever they’re able.

It’s not just good enough to be disgusted at injustice, godly people risk their lives in pursuit of what is right.

As you focus on how to make God first in the many different areas of your life, remember that we do not serve the God of the omission, but the God of the  commission.

That… is the opposite of evil

God did not save you to set you on the sidelines and make sure you stay sparkling clean. You have been redeemed to make a difference  in your world, and if you want something to change in your life, you’ve got to change something.

One Reply to “Opposite Attract”